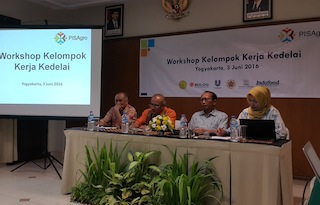 PISAgro’s Soy Working Group recently held its annual workshop on June 3 in Jogjakarta. The event was hosted by Unilever Indonesia as the leader of the soy working group.

The event, highligted progress within the Soy Working Group’s  existing program in West Java (Indramayu), Central Java (Grobogan), Yogjakarta, Banten, and East Java (Madiun). On top of that part of the event was a lively hearing and discussion session with farmers, associations, reseachers,  and other stakeholders including the government.  The workshop also discussed  new  prospects and potential areas for expanding seeds multiplication. It was identified during one of the session that in 2016, the working group targets to plant approximately 174 tons of soy seeds on more than 174 hectares potential farmland and involving more than 300 farmers.

The Soy Working Group has initiated the 2016 strategy that includes advocacy to the government to support  soybean smallholder farmers’ on-farm activities by providing dryers, seed cleaners and moisture testers.